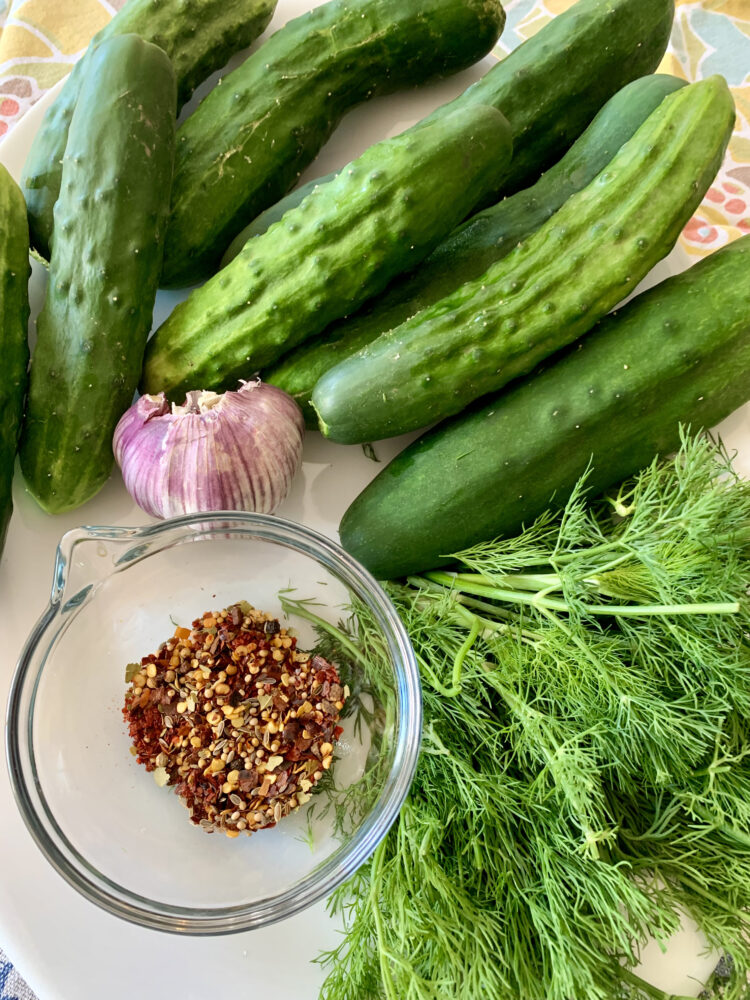 It’s mid July and if your a gardener odds are your cucumber plants are busting out! My cucumber plants usually do pretty good each year and I look forward to making refrigerator pickles when my green beauties expand quickly on the vine. I like crunchy pickles so the refrigerator version over the processing version is what I prefer, plus it’s way easier. I’ve seen recipes where folks say that the pickles are only good for 3 or 4 weeks before they spoil.  I have had mine for a few months and have had no issues with eating them. Just be super careful and always use clean utensils when retrieving your pickles and of course keep in a properly chilled refrigerator. Just watch for cloudy brine or any off smell.  I love my pickles spicy and full of garlic and dill. This year I added extra jazz by trying the fennel and mustard seed as well as the Korean pepper flakes.  The more flavor the better in my book. The secret ingredient is saffron in this recipe. I like the color and flavor it gives the brine. This recipe has a lot going on, but you can  make refrigerator pickles much more simply. As long as you have dill, vinegar, and cucumbers you can make pickles.  This year I sliced my pickles to fit on burgers and sandwiches as well. I like the jars of stacker pickles at the store and thought I can do that too!  I placed the stacker slices in with spear cuts so that I have a choice in each jar.  The spear pickles are so good in Bloody Mary’s! A splash of the brine in the Bloody Mary mix is also lovely.  During the summer I make several batches of pickles and share with family and friends. On a side note if you have lots of zucchini you should try pickling them with this recipe instead of cucumbers. I almost like the pickled zucchini better than pickled cucumbers!
Keyword Organic Food

This site uses Akismet to reduce spam. Learn how your comment data is processed.

Get New Yum So Fresh! Recipes Sent Right To Your Inbox.